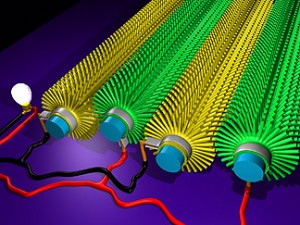 Nanotechnology is the science of engineering microscopic particles to perform tasks on a cellular level. Some nanoscientists are developing microscopic machines to perform tasks in a world so small that the unassisted human eye is unable to watch. Various nano-fields have emerged: nanomedicine, nanoengineering, nanoagriculture, and many more. Scientists are making astounding discoveries on the nano scale level.

A growing number of people are discovering new and innovative ways to create electricity without the use of fossil fuels or other non-renewable sources, even green ways to power portable electronic devices. Most people use a number of portable electronic devices such as, cell phones, PDA’s, laptop and micro computers, MP3’s, games, etc. Power for these devices can be harnessed using small solar cells, micro-wind generators, hand-crank generators and more.

Scientists at Georgia Tech are developing a power-generating fiber that can be woven into commonly worn articles of clothing. Zinc Oxide, a naturally-occurring substance formerly used in medicines, is formed into nanowires. These microscopic wires are then woven into textiles made of virtually any fabric (the researchers used Kevlar in their experiment). As the nanowires move among the fabric, tiny vibrations and friction create electricity. And we all thought static electricity in clothing was bad.

It is estimated that one (1) square meter, or about nine (9) square feet of this nanowire-woven fabric can create eighty (80) milliwatts of electricity. This power can then be converted to a form useable by your portable electronic devices.

When woven into fabric used for exercise, such as running shorts or jogging pants, the amount of electricity produced would be increased by movement. Power could then be stored in rechargeable batteries and transferred to small electronic devices. Clothing designed for night use could also be illuminated using the power generated by the garment itself, thereby providing light for work or safety.

As this technology improves, we could see power-generating nanowires woven into automobile seats, home furnishings, blankets or any imaginable fabric application. Imagine an outdoor flag that generates small amounts of electricity when the wind blows, stores that power in rechargeable batteries, then those batteries are used to recharge your cell phone!

The principle of vibration creating movement in the fabric which produces electricity has made some persons wonder how this material might work in sound-dampening blankets. If such blankets were placed around large machinery or other loud equipment or devices, the vibrations could create electricity for green uses. Perhaps there is at last, a useful purpose for noise pollution.

Installing a central AC unit in a home is one of the best ways to cool the home. These units are cheaper to run...