Home Archives Urban Decay – Does the rise of the city mean the end... 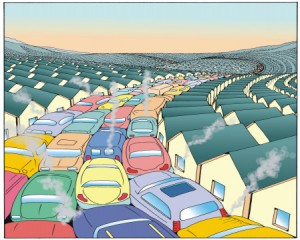 Urban sprawl or suburban sprawl is a term related to the spreading of a city and its suburbs over rural land at the fringe of an urban area. Sprawl consumes much more land than traditional urban developments because of the low-density nature of the sprawling development.

The trend in the United States and many other developed nations has been to develop new land close to urban areas, but not within walking distance. The idea has been that low-density areas offer better schools, lower crime rates and increased privacy. For the most part, this has been true. However, closer examination reveals that inhabitants of these low-density developments are statistically more overweight, in poorer health and require the increased use of automobiles. The latter causing increased fossil fuel emissions and a higher rate of automobile deaths.

In addition to residential sprawl, retail and manufacturing sprawl is also a concern. Traditional industrial developments involve the extensive use of impervious paving methods and huge energy consumption. The trend has been to develop residential areas as far from industrial and retail developments as is reasonably possible. This type of development increases the automobile dependence that America has been experiencing.

Another problem has been the more recent trend toward so called leap frog development. Some developers have purchased large tracts of rural land, much of it wooded land, and have cleared the land to create large subdivisions with large individual tracts. Although an attractive development to some, the reality is that severe damage is done to the environment and indigenous wildlife. In these cases, what had been wildlife habitat has been de-forested and developed for human use. These developments break-up the continuity of wildlife areas and limit the ability of such indigenous life to survive.

There is, however, encouraging news. Many strip-malls are being converted to lifestyle centers which include common areas, plazas, café’s and recreational spaces. This increases the public use of these previously low-density developments and provides needed recreational opportunities. European countries such as France Belgium and Germany have implemented size restrictions for malls, superstores and strip-malls in an effort to control sprawl.

Many cities have enacted growth boundaries in an effort to stop sprawl and encourage the re-development of urban areas that are currently in disrepair. This has brought new life to many previously disadvantaged areas and has increased the property values thereof.

The American Institute of Architects recommends against sprawl and instead endorses smart, mixed-use development, including buildings in close proximity to one another that cuts down on automobile use, saves energy and promotes walkable, healthy, well-designed neighborhoods.

The Sierra Club, a San Francisco, California (USA) based environmental organization, opposes sprawl and supports investment in existing communities. Many other such organizations worldwide are taking a stand against sprawl and are advocating smart design technologies.

A number of studies indicate that affluent empty nesters are heading back to inner city areas to downsize their housing and enjoy the cultural diversity and convenience of these high-density areas. In many such cases an automobile is not required. For example, in most US cities, older parts of the city are being demolished and new condominium mixed-use developments have emerged. These communities offer walking-convenience to shopping, dining, entertainment and recreational facilities of many diverse types. As a result, many urban areas that were previously high-crime areas, have become safe and healthy, upscale residential areas.

It would appear that two things need to happen to prevent the increase of sprawl. First, every area at risk of sprawl will need to enact legislation to limit growth and set boundaries. Second, citizens must take an active role in affecting such legislation, while also working locally to discourage sprawl by taking advantage of the low-cost real estate hidden in every city.