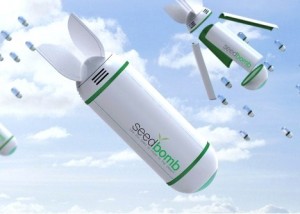 No matter how you say it, the word bomb always sounds negative. In this case, there is a positive outcome. The Seed Bomb is the brainchild of a group of inventors hoping to create an effective way to not only plant seeds, but nurture young trees and other vegetation to strength without human cultivation.

The so-called Seed Bomb is a large bomb-like device that contains many small capsule-shaped pods. The pods contain soil, moisture, seeds or seedlings, and nutrients for early plant growth. The pods resemble small terrariums that keep moisture inside and allow sunlight in. One end of the capsule is heavier than the other and is designed to settle into the earth in an upright position.

As the plant matures, the organic capsule disintegrates and the new plant is on its own. There is no waste material remaining. No cultivation, watering or fertilization is required. Some have humorously called it a “weapon of mass forestation”.

Although the name Seed Bomb lacks the sound of mass appeal, the idea seems solid. To plant large tracts of land with trees or other oxygen-producing plant life, the cost of labor and equipment would make the effort unattractive at best. This mass-planting method could help solve that problem.

In areas of the world where forests have been destroyed at an alarming rate, the Seed Bomb could begin the re-growth of massive regions of the world. Using this method, a variety of trees and plants could be planted in a random manner, much like nature had originally done. The capsules require no care or human interaction to create viable plant life. The method may be too expensive for smaller areas or in developed countries where re-planting regulations have been enacted to protect forests from total loss.

Another use not mentioned by the inventors may be the planting of food crops in undeveloped countries. The capsules could be filled with a food crop capable of thriving in a previously barren region. Genetic engineers could help with plant development. The self-sustaining capsules would allow the crop to become hardy and prepared for the ambient environment, perhaps eliminating famine.

The Seed Bomb could be used to return previously extinct plant life to remote areas without leaving a significant human footprint. How about placing genetically engineered plants in existing forests to control insects or disease? Perhaps placing plants that provide food for animals is another use for this technology.