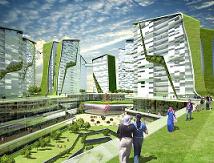 James Auger and Jimmy Loizeau are UK-based designers with a taste for the unique when it comes to alternative energy. These scientist-inventors are among a small group of creative thinkers that are designing a series of household products powered by the dead bodies of flies and mice. That’s right, dead bodies. In fact, these devices actually kill the pests and digest the carcasses for energy.

One such device is a mouse-killing coffee table. A small channel in one leg of the table gives the rodent access to the table top. In the table top is a trap door that opens and closes electrically. The mouse falls in the trap, the door closes, and the bio-digester in the table eats the carcass for energy to operate the door. Supposedly there is no odor released in the process.

Another device is a lamp that lures and captures flies or mosquitoes and digests them to create enough power to operate the insect attracting light. Nothing is said about what happens to any waste left over after bio-digestion in either device.

While this is an interesting series of experiments, there are certain questions that arise. How necessary are these types of devices in developed countries? For the most part, the supply of flies and mice are limited in most homes. If there is not a sufficient supply of fuel, the device simply stops working. Do you prime the machine with some bugs or rodents from the pet store?

If this type of device really works and is efficient in bio-digestion, what might be next? Sci-Fi film writers have already introduced flesh-eating robots that could endanger or eliminate the human race. Perhaps this is far fetched, but the concept can be unsettling.

On the other hand, in developing parts of the world, flies and rodents are a serious health threat. If those threats could be removed and used as energy, there may be benefits from this technology. Perhaps we would then be faced with mice as an endangered species.

Dead bodies aside, scientists are perfecting bio-digestion systems that can capture methane gas from decomposing human and animal waste, and other systems that can do the same with vegetation. Perhaps one great idea would be to use a bio-digester to convert kitchen food waste into electricity to power another kitchen device. How about a coffee pot powered by the decomposing coffee grounds from the day before?